PGW mourns the passing of Norman Paterson, who was the last surviving founder of PGW 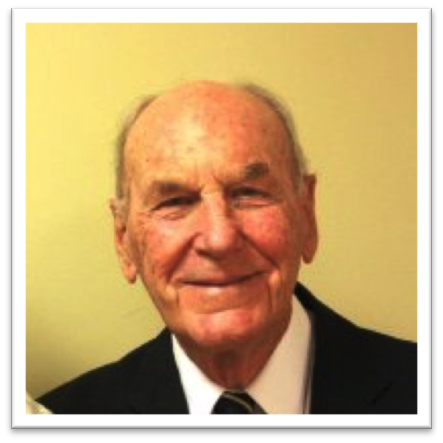 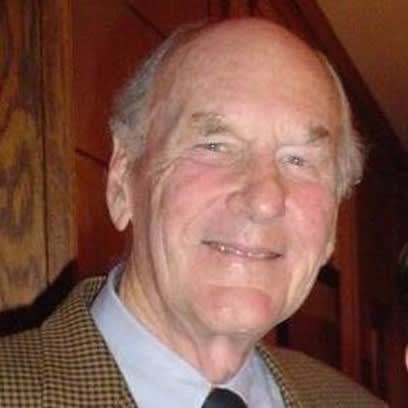 The geophysical community lost a giant on December 22, 2022 when Norm Paterson passed away, a month short of his 97th birthday. Norm’s remarkable career spanned a range of techniques and a number of companies that built strong legacies, with contributions to the full exploration cycle from instrument development to interpretation. He touched and influenced a number of prominent geophysicists along the way, in Canada and worldwide.

Norman Reed Paterson was an outstanding member of the small group of geophysicists who, after World War Two, generated the surge in geophysical developments and activity which propelled Canadian geophysics into world leadership. Norm was born in London, England to Canadian parents. He and his brothers moved to Canada with their mother in 1939 before Norm enlisted in the British military in 1943, at the age of 17. After WWII, he returned to Canada in 1947 and attended the University of Toronto, graduating with a B.Sc. in Engineering Geophysics in 1950, and continuing his education by earning an M.Sc. at the University of British Columbia in 1952, followed by a Ph.D. from Toronto in 1955, where he was one of Tuzo Wilson’s first post-war graduate students.

Norm’s first working experience in geophysics was as a seismologist in hydrocarbon exploration, However, he spent most of his distinguished career in geophysics applied to mining exploration. He participated in or was responsible for the discovery of more than twenty commercial or potentially commercial ore deposits in Canada and in many other parts of the world.

After receiving his Ph.D. in 1955, he began his career with Dominion Gulf in Toronto. He then joined Hunting Survey Corp. in Toronto as Chief Geophysicist. There he managed ground and airborne geophysical surveys in Canada and in many other countries. In 1964. he formed Huntec Limited, which rapidly gained a reputation as a leading manufacturer of geophysical instruments, as well as a skilled consulting and contracting company in geophysical surveys. In 1970, he left Huntec to form a consultancy, which in 1973 became Paterson, Grant & Watson Limited, joining with other well-known geophysicists Dr. Fraser Grant (1926-1984) and Roger Watson (1936-2021). PGW rapidly became a world leader in geophysical consulting and project management for mineral exploration. Within PGW, as it was universally known, recognizing the growing importance of computer applications, he established Geosoft Inc. headed by Ian Macleod, which is now a division of Bentley Systems and the dominant world supplier of software for processing and interpreting geophysical and geochemical data.

Norm’s career at PGW and earlier took him across the world. He had a particular affinity for contributing his knowledge and expertise in the developing world, across Africa, India and elsewhere, with involvement in many projects funded by CIDA. Although his reputation usually preceded him, admiration by other geoscientists only grew once they experienced direct interaction. He was a mentor to and collaborator with multiple generations of geophysicists from the start of his career and his influence and inspiration endure. Norm’s published technical contributions approached eighty, including seminal journal articles.

Norm retired from full-time practice in 1995, handing the reins of PGW to long-time associate Jim Misener, but continued in consulting. Like many in the profession, he once said that geophysics was so interesting that he could not contemplate leaving it, even in retirement, and he was always interested in discussing new developments with visiting former colleagues.

His contributions to the geophysical industry have been recognized in several significant ways. In 1997, he was elected a Fellow of the Royal Society of Canada, citing his work in the geological interpretation of magnetic surveys. In 1999, he was inducted into the Canadian Mining Hall of Fame, where his citation in part reads, “Paterson has been praised the world over for the sound balance he achieved between the practical, applied science of geophysics and his professionalism and integrity. No matter where in the world his assignments took him, he always served as an excellent ambassador for the Canadian mining industry.” He was recognized as a notable pioneer by the KEGS Foundation As Dr. Gordon West wrote in a dedication, “Norman Paterson exemplifies the combination of technical understanding and prowess with professional competence and management skill that makes geophysics succeed. His career is one that can be held up to students to show them how individuals can make science and technology have a positive benefit for society.”

In retirement, Norm and his wife Sally moved to a farm near Clarksburg, Ontario and later had a home in Thornbury on the shores of Lake Huron. They wintered with family in Costa Rica. At the age of 93, Norm’s breadth and depth of experience made him uniquely qualified to write the book “Mining Geophysics: A Canadian Story”, aided by a number of noted collaborators and contributors, and published by the CIM. It is a must-read for anyone who wants to appreciate the developments, events and key innovators and contributors that gave rise to Canada’s becoming a global leader in geophysics and mining exploration during the 1945-1975 period. Remarkably, turning his diverse talents to fiction, he subsequently wrote three mystery novels, some set in his beloved Georgian Bay, as well as devoting considerable effort to pursuing possible alternative causes of global warming. 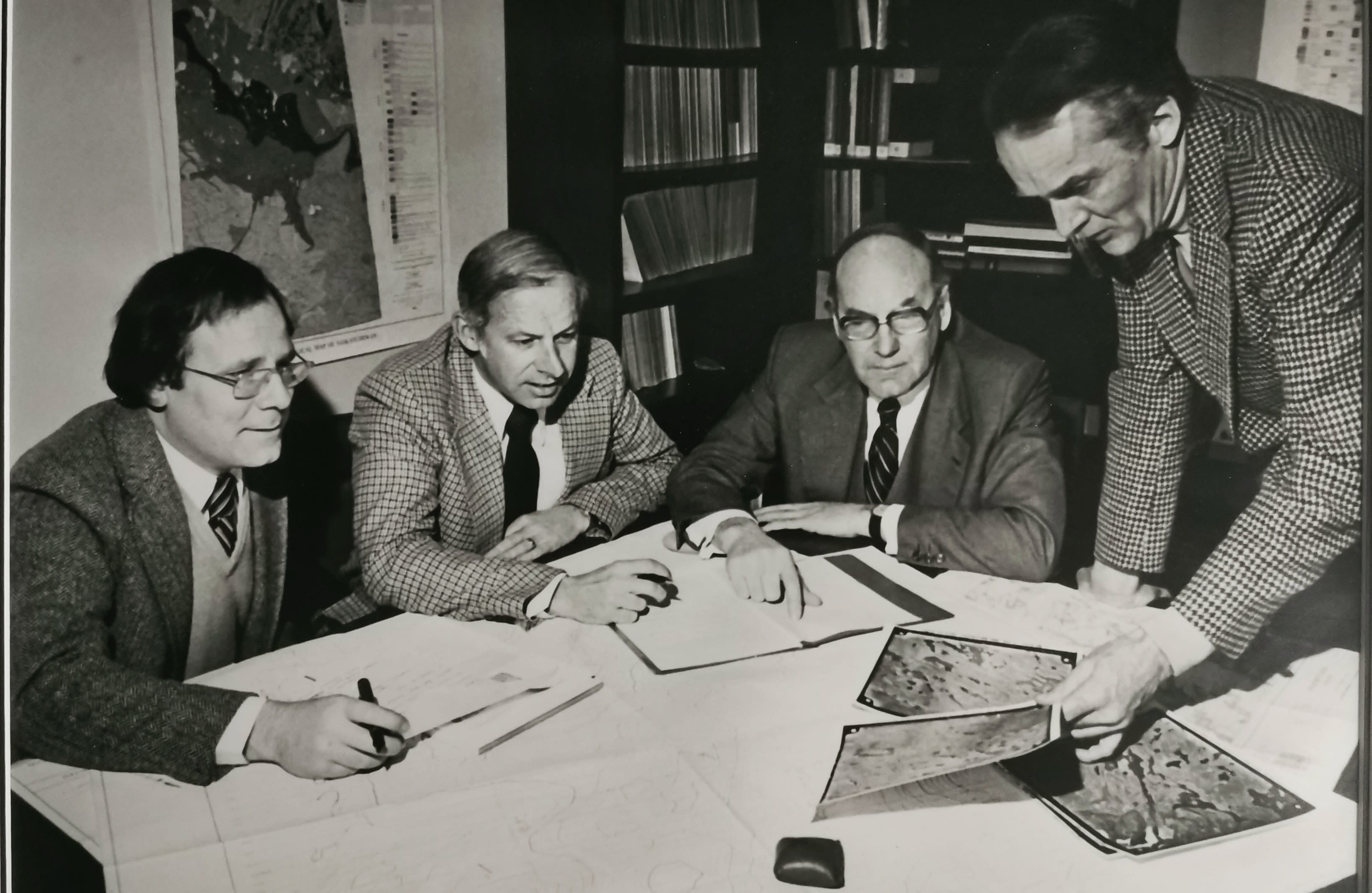 Norm (second to the right), with James Misener, Roger Watson, and Fraser Grant.

In dealing with the inevitable major demands on his time and energy in undertaking global geophysical projects and managing Huntec and then PGW, Norm was greatly aided by his wife of nearly 70 years, Sally, who predeceased him in 2018. They met at the University of Toronto and shared an affinity for travel, sailing and other outdoor pursuits. He was a devoted and attentive father to his four children, Catherine, John, Michael and Norman Jr., who have all had interesting careers, together with their spouses. He was a much-loved grandfather and great-grandfather to 7 grandchildren and 12 great-grandchildren. In his final years, Norm became companions with author Dorris Heffron, moving into her lovely home in the Beaver Valley.

Bill Scott, a noted early collaborator, offered the following reminiscence: I first had the privilege of working for Norm Paterson at Hunting Survey Corp. after my first undergraduate year, in the summer of 1959. It was an exciting summer which confirmed my interest in becoming a geophysicist. In addition to infecting me and my fellow summer students with his enthusiasm, Norm taught us a great deal about the importance of high-quality data, and about the need to understand the meaning of what we were finding. I can still remember a discussion with him on the implication of the number of significant figures in a number (measurement), a lesson I never forgot. Over the years, I have worked on other programs for and with Norm and remember them as greatly enjoyable and instructive times.

Stephen Reford reminisced: I had the honour of working for and with Norm at PGW from 1981 until his retirement. He conducted himself with professionalism, dedication and grace, and instilled these qualities in his employees and colleagues. I recall a field trip with Norm to Burkina Faso in the mid-80’s, part of a CIDA geophysical interpretation project to assess mineral potential. It was focused on ground truthing aeromagnetic anomalies, first proving their location in the days prior to GPS and secondly, hoping to find an outcrop amongst the dark red soil characteristic of the Sahel. This remains the toughest field work of my career due to the extreme heat and new cuisine. Norm soldiered on as leader of the team. Partway through a traverse, we settled under a large tree for a break from the heat. It was located in a field outside a local village. Soon after, a small delegation from the village brought water for our group. An elder presented Norm with a live pintade, a domestic fowl. Norm accepted this gift as a deep sign of respect from one elder to another, and later gifted it to the local geophysicist who was guiding us. After we completed the project, of his own volition Norm dug back into the data, extracting numerous examples and published a journal article to show how these data could be applied to groundwater exploration, a sorely needed resource in the Sahel.

There will be a memorial service for Norm at St. George's Anglican Church in Clarksburg, Ontario on February 11 at 1 p.m. Norm was to be the Guest of Honour at PGW’s 50th anniversary celebration on March 6 during the PDAC Conference. Now it will be an opportunity to celebrate the legacy of a remarkable geophysicist and person who was a key contributor to the world-renowned expertise of Canadian mineral explorationists.